Question: What do 13 Italian men do in the back room of a café/bar from 10pm-2am on a Thursday night?  Yes, it’s perfectly legal…and no, it has nothing to do with the mafia (at least I don’t think so, though I’m learning that the mafia is a part of everything in this country). 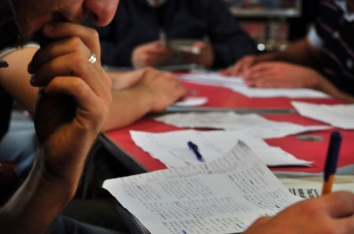 Answer: They draft their FantaCalcio teams.

Seasonal depression hits Italian men hard during the summer months. The heat, the humidity, the mosquitoes, and even the tourists would all be bearable but for the fact that there is no soccer from mid-June until late-August. No Sunday or Wednesday games. No Champions League. No betting. No Derbys (games between rival teams). What is a poor tifoso – fan – to do but slip into a state of utter apathy? In fact, it must have been clinically advised by American doctors to overlap the football, basketball, and baseball seasons so that no American man would have to suffer this between-season slump.

But all is not lost!!  August comes and the country shuts down for vacation. After a week or three of soaking up all that this Mediterranean sun has to offer, Italians return home to prepare for the FantaCalcio draft. These soccer fanatics dedicate hours upon hours to the careful study and assessment of the 450+ players in Serie A – Italy’s highest national league. I imagine that this transition from absolute ambivalence to freakish obsession is the #1 cause of autumn breakups, marital disputes, shirked responsibilities and missed appointments in the country.

If only girlfriends and wives could understand the significance of the FantaCalcio draft! It cannot be underestimated; you’re bound to its outcome for the entire season. And in your tight circle of friends, cousins, and brothers, any mistake will likely haunt you for an eternity.  My poor boyfriend is still the butt of numerous jokes for a player his “co-manager” chose several years ago – a no-name rookie who was believed to be “a secret weapon.” This player proceeded to enter his first Serie A game, played horribly, and remained on the bench for the rest of the season, a dead weight his FantaCalcio team. Despite the years that have passed, I’ve witnessed numerous occasions in which, one way or another, this player’s name comes up and everyone has a good laugh at Eugenio’s expense.

Sidenote: he has since decided to fly solo and manage his own team.

But back to the draft. Being the ragazza of the bar’s owner certainly has its advantages. In addition to cappucini with my name written in chocolate syrup, I was granted “press access” to this intense, testosterone-only, annual FantaCalcio draft.

The object of the evening was to place 26 players on each of the 8 FantaCalcio teams – 208 players total…TWO HUNDRED EIGHT!! Given that number, it should come as no surprise that the research and analysis starts weeks in advance. These guys carefully create their strategy, giving every desired player an appropriate value and maximum purchase price; after all, with a limited amount of money, it might be prudent to pass on a phenomenal player if you can get 2 or 3 great players for the same amount.

Next, each manager needed to decide which players from last year’s team he wants to keep. A responsible manager should evaluate each player’s performance, age, health, attitude (red/yellow cards count against you), and liklihood of seeing a lot of playing time. In order to keep a player, the manager must pay the same price as last year.  All other players are sent back to the market as free agents. Once the market is set and everyone knows which players are available for purchase, the draft begins. Each team has 800 “euro” to spend (likely representing 800,000 euro), less the amount paid to keep players from the previous season.

Starting with goalkeepers, one at a time a manager calls out the name of a player – any goalkeeper on any Serie A team. It’s then an auction process, and the player goes to the highest bidder.  The next manager calls a goalkeeper of his choice and there’s another bidding session. This continues in a circle until every coach has 4 keepers on his team. At this point, it’s time for a cigarette and definitely an espresso…the night is young and we still have 176 players to go..

After strategies have been assessed and tempers calmed, the bidding process starts for the defense.  Same protocol as before until every team has 8 defenders. Another cigarette, another espresso. Then the auction for 8 midfielders…smoke and/or caffinate…and lastly 6 forwards.

Finally every manager has his dream team. Sleep deprived, red-eyed and mentally exhausted they leave the bar holding onto the hope that this year is going to bring them glory and bragging rights. And thus begins the FantaCalcio season, a “friendly” competition which lasts the duration of the season and just another reason why Italians are out-of-their-minds obsessed with the sport.