Now that we’ve mastered the 40-card Italian Deck, we can start to learn the basics of Tresette.

While the game can be played with only two players, we’ll stick to the four-player version to keep things simple. The pairs sitting opposite one another play together as a team. The cards are dealt out counter-clockwise (so unnatural!!!), ten to each player. The person to the right of the dealer leads with any card of his choice.  The play continues counter-clockwise, and the other players must follow suit.  If they are void (no cards in that suit), they may play any card of their choosing.  The player with the highest card in the led suit takes the trick and leads the next trick with a card of his choice.

The play continues until all cards are finished, concluding a round.  The teams combine the tricks they’ve taken and count their points. There are 11 points in each round, the first team to 41 points wins the game.  Not too bad, right?

Now for the complicated part:

Card Rankings: the 3 is the highest card, followed by the 2, then ace, king, horse man and page boy.  Then 7, 6, 5 in that order and finally, the utterly worthless card, the 4.

Points: while the 3 is the highest card, it is not the most valuable.

Bonus Points: when the cards are dealt, if a player has the 3, 2, and ace of a single suit (called “Napoli”), or if he has three 3s, three 2s, or 3 aces, he may call “Buon Gioco” (good game) which awards his team an extra three points at the end of the round.  Upon declaration of “Buon Gioco.” the opposing team may ask the player what his buon gioco is. If asked, the player MUST declare the cards that make up his buon gioco before the start of the 4th trick (ex. “three aces – all but the ace of coins” or “Napoli in cups”). If he fails to declare his buon gioco before the 4th trick, his team is not awarded the bonus points. If the opposing team fails to ask, he does not need to reveal his buon gioco.

Communication Rules: Tresette is known as il gioco dei muti (the game of mutes) because it’s considered cheating to communicate with your partner.  No special signals or motions are allowed. There is one exception: the player who leads the trick may make one statement about the suit that he plays.

Instead of revealing what you have, you may instead choose to command something of your partner.

While it’s an opportunity to tell your partner what you do and don’t have in your hand, you need to be careful not to reveal too much information because your opponents are listening too. There are situations in which it’s best not to say anything and just see how the cards play out.

The beauty of the game isn’t in the rules, it’s in the strategy. A good memory is crucial – you must pay attention to how many and which cards of each suit have been played.

Since the aces are the most valuable, the strategy revolves around playing the aces when you know your team will take the trick. If you know your partner is void in a suit, lead with the highest remaining card (saying “e’ buono”) and it will give him an opportunity to dump an ace of a different suit and score a point for your team. Likewise, if you have the two & ace of a suit, and the opponent leads and says “ho il 3”, then you can safely play your ace knowing that it’ll take the trick.

But don’t forget all the other cards that’ll earn points as well.  If you’re void, don’t throw away a page boy unless you know your partner will take the trick. That card is still worth 1/3 a point, and all those little thirds add up!!

Now let’s go back to that evening that Eugenio “offered to teach me how to play a classic Italian card game”…imagine trying to learn the new deck of cards as well as the rules in the same evening. All in a foreign language. I had no idea what I had signed up for and to be honest, there were moments where I had to hold back tears out of sheer frustration. But Eugenio, patient and loving as always, has since played hundreds of games (the two-player version), always walking me through the strategy and explaining my errors or incorrect assumptions.  I won’t say I’m a master, that would be his brother, Jonny. But I will say the realization that I had grown confident in my ability as a Tresette player was a moment I will never forget. A moment of utter triumph in my conquest to immerse myself in a foreign culture and language.

A quick way to earn an Italian’s respect is to tell them you know how to play “Tresette.”  A favorite among old men and commonly played during the holiday festivities, this is not just a card game. It’s a fierce competition in which the smallest error, be it a memory lapse or bad assumption, can result in endless agony.

I love cards and board games, just ask my neighbor growing up. We spent all our rainy days battling in games of Gin Rummy, Monopoly, and Poker (remember what life was like for a kid before the internet?!?!?).  So when Eugenio offered to teach me how to play a classic Italian card game, I naturally jumped at the offer. But before I could learn the game, I had to learn the cards.  Should be simple, right?

We aren’t dealing with clubs, diamonds, hearts, and spades anymore.  Oh no, that would have been too easy.  We’ve got the Italian deck which has Denaro (coins), Bastone (clubs/sticks), Spade (swords), and Coppe (cups).

And you know how our decks of cards give you the hint in the upper right and lower left corners? The number and symbol so that you don’t need to see the whole card to know what you’re holding?  Yeah, you can forget about those too. Non-existent.

The card makers love to mess with you by adding all sorts of random décor, just to distract you from being able to determine the value of the card. The ace of swords comes complete with a flying angel and ribbons while the ace of coins would makes his debut on the breast of an eagle. Um, what? 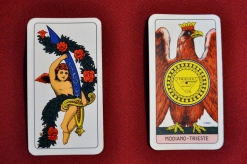 And don’t even get me started on this card:

There are 4 clearly visible swords plus an additional horizontal sword in the center.  But what are those other half-swords popping out of the two vases??!?!?  Are they plants or swords??!?! Why on earth are they blue?!?!?!  I can’t tell you how many times I thought I was playing the 7 of swords when really it was this damn 5.

Are we having fun yet?

So rather than 52 cards, there are only 40.  Ten to each suit.  Ace through 7 and then the Italian equivalent of Jack, Queen and King…which I’ve affectionately nicknamed Page Boy, Horse Man, and King.  The Italians just call them “8, 9, and 10.” While the horse man is easy to identify since he’s got his four-legged friend, the page boy and king are confusing.  Hint: you have to take a look at their headgear. Only the king wears a crown, the page boys are stuck with feathers.

Quick review: we’ve got well-decorated aces through sevens, page boys, horsemen, and kings in swords, cups, sticks, and coins. Right. And now that we’re all thoroughly confused, we can start to learn the rules of Tresette. To be continued…

A few weeks ago, my printer ran out of ink which meant it was time to learn a bit of new vocabulary. At this point, my Italian is good enough that I can work my way around an unknown word, I could easily walk into a store and ask, “Excuse me, do you sell………..the black stuff that a printer uses to write?” While it’s a pretty effective way to get your point across, I still want to improve my vocabulary.

“Non ti preoccupare, ci sono tanti locali che la vendono.” Don’t worry, there are a lot of places that sell it. I continued to mention my need of “la seppia” for the better part of a week, until I finally had a free morning to run some errands.

I called Eugenio to ask him exactly where I could find “la seppia.” He told me that there was a shop next to his bar, but he didn’t give me much more detail. No problem, his aunt & brother were working at the bar that morning so I could get the rest of the information from them, all while enjoying my usual cappuccino and cornetto.

“Dov’è quel negozio qua vicino che vende la seppia per stampanti?” Where is the shop near here which sells “la seppia” for printers?

No response. I was surrounded by blank stares and puzzled faces.

I’ve become used to this reaction though; it usually means that I’ve been sloppy with my pronunciation. I repeated my question, paying special attention to my cadence and careful to correctly roll my rrrrrrrrrs.

Again, blank stares. Okay is my accent really that thick?!?

“Si!” relieved that finally someone was able to repeat what I was trying to communicate. Once someone with a native tongue repeats what I said, everyone is usually on the same page.

But no, everyone still remained confused. Okay, something’s not right.

I heard Cico, a regular at the bar, say “Bella, dovresti andare alla pescheria per trovare la seppia.”  You’d have to go to a fish market to find la seppia. And at that point everyone busted up laughing.

And then it hit me. I never actually consulted a dictionary to determine what the Italian word for “ink” was.  I used “la seppia” because it’s always written on the menu for squid-ink pasta. If I had paid more attention, I would have realized that the dish is called “pasta al nero di seppia” – literally, pasta with the black from a seppia.

“Nero” refers to the ink.

“Seppia” is the animal that produces the ink.

Which meant that I was essentially asking for a place that sells squid for my printer.

After a good laugh at my expense, Eugenio’s aunt informed me that the word for ink is “inchiostro,” and with this knowledge I was able to buy a new printer cartridge. But first I made a quick phone call to my darling boyfriend to chew him out for not having once corrected me. I must have used “la seppia” incorrectly a dozen times.

His defense? “Well, I knew what you meant…so I let it go.”

And therein lies one of the challenges of a life in a foreign language: you make mistakes, and you make them often. People don’t want to correct you because they find your errors endearing. You don’t want to be corrected too much, or else you lose confidence.

But at the same time, you also don’t want to walk around asking for squid for your printer.

While I have no answer for how often one should correct a non-native speaker, I will say that I learned a critical lesson: to learn a new word, I need to consult a dictionary rather than a menu (or my boyfriend for that matter). 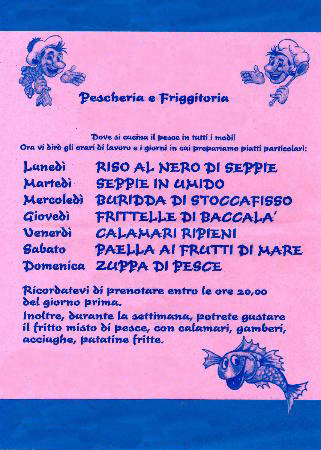